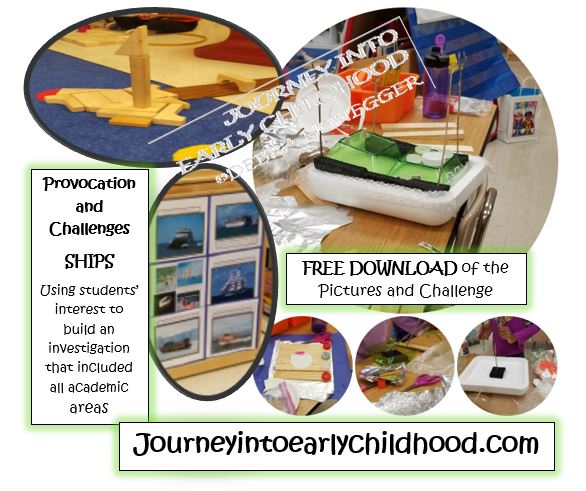 Provocations are materials or the way we present materials to create a context where the child can explore. They are an extension or a challenge to our children’s current thinking and theories.

This past year we have been exploring different ways to add provocations within the construction center.

We began by observing and noticed that the students were consistently building ships. We started talking about the different types of ships and added pictures of different ships and started reading books during interactive read aloud time about ships.

SHARING: SHIP and BOAT PROVOCATIONS                             In this document, you will find pictures of different types of ships and boats, open-ended questions to pose and higher-level vocabulary to incorporate while engaging with students, and challenge cards to provoke students thinking. 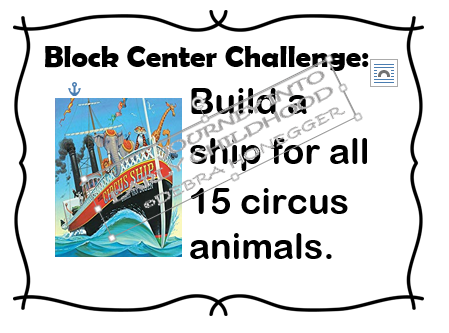 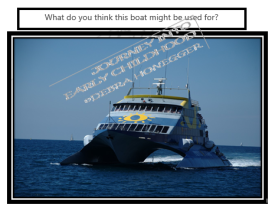 Materials were added as students began to increase their thoughtfulness regarding ship building. For example, we included Duplo Blocks when the students drew their plans to build cargo or freight ships (note: students always made a sketch first of what they were going to build first to add in thoughtful planning. Many times when the students would add details to the construction part, they would return to their drawings to include those same details.)

and we added dowel rods, white paper and fabric, and tape when they stated they wanted to build sailboats and/or pirate ships. The problem solving that occurred to 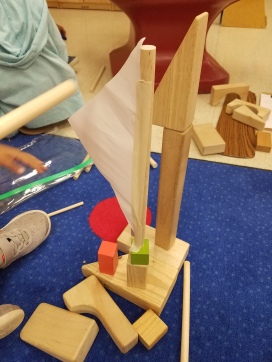 Math objectives added included size proportions with the size of different ships. The students decided that they did not have enough blocks to build many of the ships to the correct size but that they could build a rowboat.

Social Studies objectives added included where ships and boats sail- the bodies of water. We discussed which ships would sail where, what would they carry, why some people have to travel by boat or ferry, etc.

Since the students continued to be interested in ships, we turned their interest into a unit long STEAM investigation in which the students first became material engineers to determine what materials were best for shipbuilding (what materials would float).

We next read the book, Circus Ship by Chris VanDusen, stopping after the ship hits a rock and starts to sink. We challenged the students to build a ship that would float and hold the 15 circus animals. The students worked on their ships each day for a week- some continuing to add to their original ship and some starting a new one. We tested the ships and the students added 15 animals. Note: We provided more than 15 animals so that the students were required to count them as they tested each of their ships.

The students continued to explore with ships throughout the year. During an investigation of Farm to Table, the students started making ships and when we inquired as to how the ships relate to the farm, they shared that sometimes food is transported on ships! So to move our food from the farm to the factory to the grocery store, the students built and then play acted with both trucks and ships!

and/or sign up to receive my weekly blog through your email- more provocations will be shared on through this website. 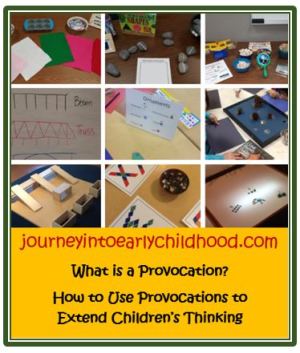 Provocations are materials or the way we present materials to create a context where the child can explore. They are an extension or a challenge to our children’s current thinking and theories.

Teachers provide materials, media and general direction as needed but the children take the ideas where they want.

The image of the child is one of competency. We honor the children’s abilities to explore, create and make meanings. Through provocations, we allow children to develop their theories, test their theories, and develop more and deeper understandings as we continue to offer additional materials and open-ended questions. The students are the ones shouldering the heavy work and thinking- they are the ones doing the learning.

Construction Play Center, Creation Station, and Discovery Center are all ideal places to add in provocations to extend the learning and encourage students’ thoughts, ideas, and play on a specific topic or objective.